Moonlight, Manchester by the Sea, La La Land, and the Modes of Modern Cinema 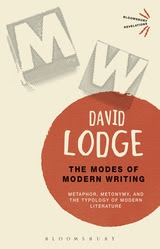 I recently finished reading David Lodge's The Modes of Modern Writing: Metaphor, Metonymy, and the Typology of Modern Literature, originally published in 1977 but reissued last year by Bloomsbury Press. I had previously known Lodge from his excellent collection The Art of Fiction, and enjoyed this book equally, admiring the attempt to incorporate structuralist theory into more traditional style criticism. And although it is now 40 years old, the ideas remain useful to think about in discussing how literature, as well as other narrative art forms, work. The central idea of the book is looking into the realist and modernist traditions in literature, and trying to show how they differ on a formal level. To do this, Lodge uses the linguistic theory of Roman Jakobson and the distinction between metaphor and metonymy. He quotes Jakobson's distinction as follows:

"The development of a discourse may take place along two different semantic lines: one topic may lead to another either through their similarity or their contiguity. The metaphorical way would be the more appropriate term for the first case and the metonymic for the second, since they find their most condensed expression in metaphor and metonymy respectively. In aphasia one or other of these two processes is blocked. . . . In normal verbal behaviour both processes are continually operative, but careful observation will reveal that under the influence of a cultural pattern, personality, and verbal style, preference is given to one of the two processes over the other." (99)

This preference for one or the other poles breaks down the difference between different styles (modernist versus realist), different forms (poetry versus novels) or even different mediums (drama versus film). 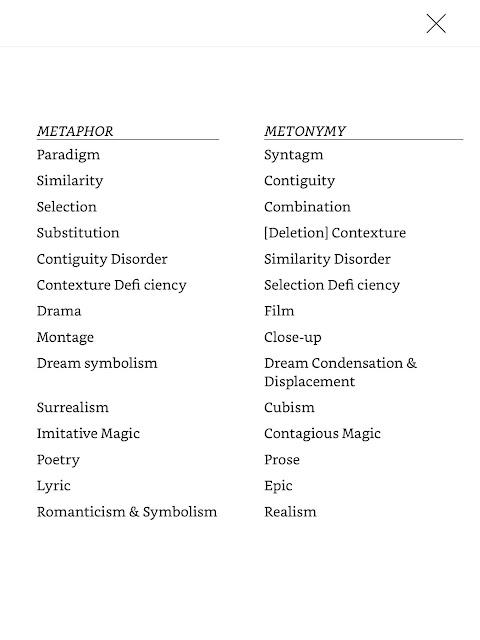 While this distinction can seem overly schematic, Lodge is a sensitive enough critic to show how they are indeed poles along a spectrum rather than strict binaries, and generally, especially in his specific case studies, the two modes of metaphor and metonymy are quite useful in understanding individual writers and styles and even, more ambitiously, literature itself.

As often happens whenever I read something, I tend to apply it to pieces of culture I encounter. Sometimes this is counter-productive and connections are made that are not really there, but there are points where I think it helps clarify certain thoughts and opinions. I just watched perhaps the two most critically acclaimed American films of last year: Barry Jenkins' Moonlight and Kenneth Lonergan's Manchester by the Sea. Both are excellent, and in trying to think through them, Lodge's distinctions remained in my mind, as did his general comments on cinema, such as the following:

"Underground movies define themselves as deviant by deliberately resisting the natural metonymic tendency of the medium, either by a total commitment to montage, bombarding us with images between which there are only paradigmatic relations of similarity and contrast, or by parodying and frustrating the syntagm, setting the naturally linear and ‘moving’ medium against an unmoving object" (107)

While discussion of medium "essences" is always dicey, I have to admit to an affinity with this perspective. Which is not to say that formalistic filmmakers are inferior or doing something perverse, but simply to state that they are working against the form of the medium. Lodge's literary examples are interesting for comparison. Wordsworth, for example, is considered a great poet, but does so by going against the metaphorical nature of the poetic form:  "A different kind of deviance results when the poet, especially the lyric poet, pushes his medium in the opposite direction—when he makes the metaphorical development of his topic subject to the kind of metonymic constraints that the realistic prose writer normally applies. This is a path likely to be followed by a poet reacting against what he feels to be a decadent metaphorical mode—for example, Wordsworth." (145) Likewise, the brilliance of an Eisenstein or a Warhol is connected to their challenging of the realist nature of the cinema.

When analyzing Moonlight and Manchester by the Sea, both seem to fit broadly within the metonymic mode, not surprising given the overall critical consensus about their worth. That said, these are poles, and certainly neither is strictly trying to create pure realism. On first glance, Moonlight would appear to be the more poetic and thus more metaphorical of the two. with Manchester by the Sea attempting a more realist approach. The opening of the films offer a contrast in this regard.

Moonlight opens with the arrival of Juan, the neighborhood drug dealer and eventual father figure for the main character, Little. The eye is immediately drawn to the blue color of the vehicle, and when the scene eventually cuts to Little running away from bullies, we immediately notice the same color backpack. There remains throughout the film a certain heightened reality, which can be seen in its three-part structure of different time periods, in which we are not so much told a linear narrative as we are given a mood poem about this one person's life, which at the same time metaphorically represents both his race, gender, and sexuality. 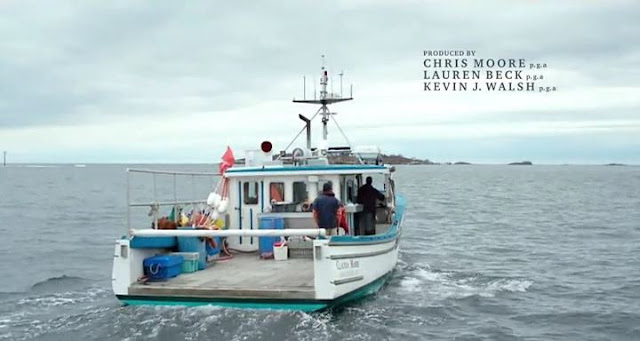 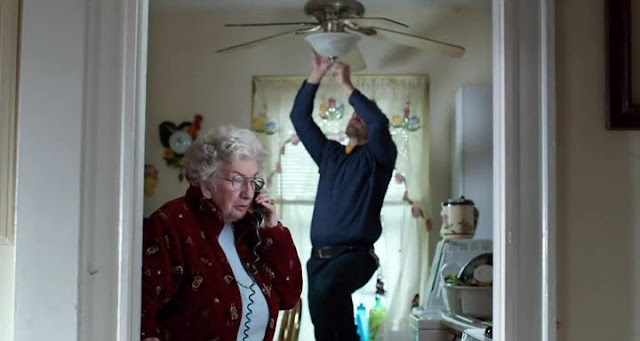 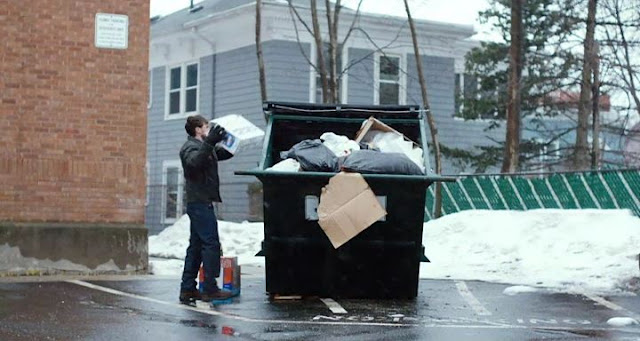 Manchester by the Sea, in contrast, seeks a greater naturalism in selecting various everyday images that suggest the routine of the main character, Lee Chandler. Even the shot near the opening of Lee, his brother, and his nephew on a boat, while having certain thematic connotations, is still meant to be absorbed as part of the setting of the story. On close inspection, everything being presented by Lonergan has significance, but its impact depends on the audience being absorbed into this world. Even the shifts in temporality are not presented as a structural device, but rather as a reflection of the main character's memories. Although Lonergan is known as a playwright, if one were to guess, this feels much more like an adaptation from novel rather than play (in fact it is an original screenplay). 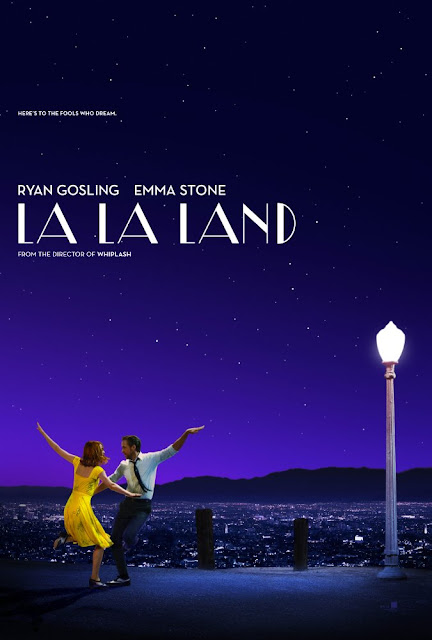 While I greatly enjoyed both films, my favorite of the year continues to be Damien Chazelle's La La Land. If forced to come up with a reason why, beyond contingencies like seeing the movie in the cinema as opposed to an online screener, I believe, strangely, that it may have something to do with its weakness as drama. La La Land really only works as cinema, and announces its unreality right away, existing in a very different space than the realist drama. In other words, it is very close to the metaphorical pole, especially in its structural similarities to the Broadway musical (see David Bordwell's detailed discussion here). It is the pure cinematic verve of Chazelle, and the movie's lack of reality, that I love, although even this film has long stretches where it shifts to the metonymic pole, such is the pull of realism in the cinema. This leads to a greater backlash (Chazelle is trying too hard, all style/no substance, etc), and in the era of Trump, Hollywood may decide to honor a more socially conscious drama like Moonlight over a movie that celebrates Hollywood itself (which it normally loves to do, of course). But despite the emotional impact of the heavy drama in Moonlight and Manchester by the Sea, La La Land was able to create a similar impact with much lower stakes, which leads me to value its artistic achievement more.
Posted by Marc Raymond at 4:28 PM

Marc Raymond
Associate Professor in the Department of Communications (Media/Journalism) at Kwangwoon University, Seoul, South Korea. My first book, HOLLYWOOD'S NEW YORKER: THE MAKING OF MARTIN SCORSESE, was published by SUNY Press in April 2013. I have published pieces in FILM HISTORY, JUMP CUT, CANADIAN JOURNAL OF FILM STUDIES, FILM CRITICISM, STYLE, NEW REVIEW OF FILM AND TELEVISION, and SENSES OF CINEMA. I graduated with my PhD in Cultural Mediations (Specialization: Visual Culture) in January 2009 from Carleton University, Ottawa, Canada. I taught in the Film Studies department at Carleton from 2003-2007 and in the International Language Center at Gachon University, Seongnam, South Korea, from 2008-2012.